Prepare to be amazed with our incredible kids party magicians in Sydney who wow and entertain their audiences with disappearing acts, illusion, sleight of hand and silly antics!

Have the crowds rolling in the isles with a wondrous and hilarious magic show by Sydney’s most sought after magicians. If you hire a magician for your child’s birthday, they will feel like the luckiest person in the world upon receiving a special modelled balloon birthday prize during the course of the show. 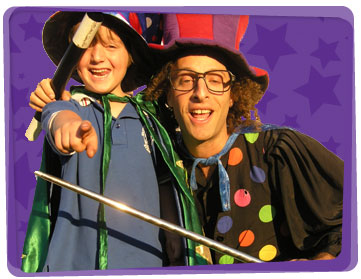 From kid’s birthday parties to trade shows, business functions and many another events, our Sydney based magicians for hire turn the occasion into something magical!

We make it easy for you to book a Magician in Sydney – all you have to do is click the big purple button and it will magically take you to our booking page or call this number: 0416 798 698.

Poppy’s party was a huge success thanks to Magic Dan, the fantastic magician we hired from Yabadoo. He was organized and punctual and took control of the party from the moment he arrived at the Bondi Beach Pavilion. It was fantastic how he mixed up some basic tricks with the more complicated ones for the older children. Magic Dan was certainly the talk of the Kindy and we’re already looking forward to seeing him again at Poppy’s friend’s birthday party next month. - Shelley H. North Bondi 2026 Sydney

Magic Magesto put on an INCREDIBLE show at Prince Alfred Park, Surry Hills! The kids absolutely loved him. The children laughed so hard when he blew his nose and there were flowers coming out of the handkerchief. Every time the children pointed to the flowers, the flowers would disappear! Even the adults were in fits of laughter. Every penny was worth it. Thank you Yabadoo, for giving our family and friends a great time! – Heather A., Glebe 2037 Sydney

Hi Des I have been meaning to email you all week. The party was a huge success and all because of Dom our kids party magician.... Amazing is not a big enough word to describe how great he was. The kids loved it from the second he walked in and all you could hear was laughter from not only the kids but some parents too. He was organised, punctual and had a flair for gauging the attention spans of the different age groups. Dom even helped the kids with their food and (to all the Mums delight) got the kids to clean up as well. Thanks again and I have already given your details to a few of the Mums so no doubt there will be a few requests for Dom coming up. - Kaylene. F

Searching for a magician game idea to play in your party whilst waiting for your entertainer to arrive?

Choose one or two children to be the magicians. Give each of them a magic wand.

The magicians run after the other children and tag them with their magic wand. The body part on which the magician has tagged the child will be frozen. 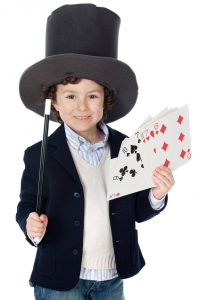 The goal is to freeze as much body parts as possible until all children have been completely frozen.

As a variation, you can have an evil magician freeze the kids and a good magician can unfreeze them.

Check out this easy magician party decoration idea for your child’s next party:

Create Your Own Magic Wand in 3 Easy Steps 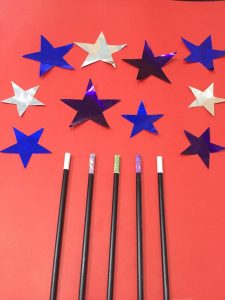 Decorations don’t need to be complicated in order for it to be effective. Just look at this 3-step magic wand creation – you’ll be turning pumpkins into carriages in no time!

All you need to do is wrap the drinking straw with black electrical tape. Make sure to smooth it out while wrapping it to lessen the wrinkles in the tape.

Cover about .5-1 inch of one end with white tape. If you want to make the wands more colorful, you can use colored tapes as well.

Use a little bit of imagination and enjoy your wand! 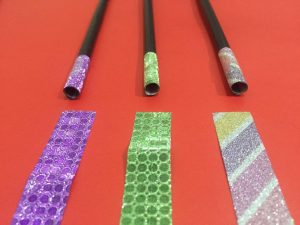 For great magician party supplies, visit House of Party at 142a Oak Road, Kirrawee 2232 Sydney, NSW. They’re closed on Tuesdays and Sundays, but you can visit them from 9AM-5PM on the other days of the week.

WOW! What a fabulous time the children had. You were absolutely brilliant! – Nina

The kids had a great time & the adults enjoyed watching too. – David

Our entertainer was fantastic! The kids were in absolute hysterics – Sivon

Wow – children were in hysterics. Parents enjoyed it too! – Anna