Be prepared for adventure, ye rapscallion scoundrels! Our Sydney based party pirates are a great choice for your kid’s birthday party and will leave the children breathless from an amazing adventure in the pursuit of buried treasure and other activities.

Watch your children’s faces transform as your swashbuckling hero takes them on a wondrous adventure through our repertoire of fun pirate party ideas for kids – illusion and comedy magic show, face painting, crazy pirate party games (including pass the parcel), a treasure hunt and a big dose of fun! Not to mention that our bandits of the sea can also twist balloon swords and other creations while the children are eating their pirate party food!

We want your birthday child to know they’re special, that’s why they’ll be modelled a balloon captain’s hat and balloon sword in the course of the magic show.

So if you would like to hire a pirate in Sydney for your kids themed birthday party, then Yabadoo are the experts with over 18 years of experience in the children’s entertainment industry!

We also cater for council and corporate events, childcare centres, Christmas parties and a never-ending list of other venues that we have serviced over the years!

Hi Ravi, Thanks for organising our Yabadoo pirate for Georgies pirate party in Sydney. From the moment he walked in, perfectly dressed up as Captain Longbottom, the kids adored him. At least four mothers came up to me throughout the party and said they'd seen other entertainers at children's parties, but Captain Longbottom was the best. They were really impressed with how he kept the children engaged, particularly through the magic show. I really appreciate his hard work with the children, and his professionalism in our dealings, both on the day itself as well as when he called to confirm three days before the event. Please pass my thanks to Captain Longbottom again! - Carrol. M

Looking for pirate game ideas to play while your entertainer is still on the way?

Remind the kids how a crocodile ate Captain Hook’s watch.

Hide an egg timer beside a stuffed crocodile. All the kiddie pirates go around and look for the “ticking croc” by listening intently to its tick. They must locate it before the timer rings! The first pirate to find it wins. You can also divide the group into two teams if you have a lot of guests. 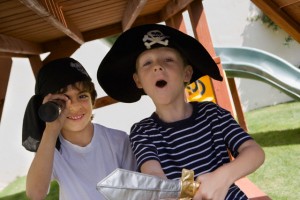 Tip: Draw a line or a set a boundary so the kids have a specific area to search for the croc. Otherwise, they may not find it. Keep your hiding place age appropriate.

The children were captivated. I will definately be booking you again! – Celeste

All the Kids and Adults loved your entertainer!!. So pleased we used your company – Allambie

I received rave reviews from lots of parents. Will definitely recommend your service. – Judith